Immediate Medical Aid saved lives
EUFOR has been helping to evacuate the population affected by floods in BiH for six days now. Timely movement and care has been provided by medical personnel to injured and sick people. The EUFOR medical evacuation team, consisting of three doctors and two flight rescuers, has provided immediate medical aid on the evacuation flights of the EUFOR helicopters. Some 41 civilians, including children and the older people, have received emergency treatment and have been transported to hospitals. 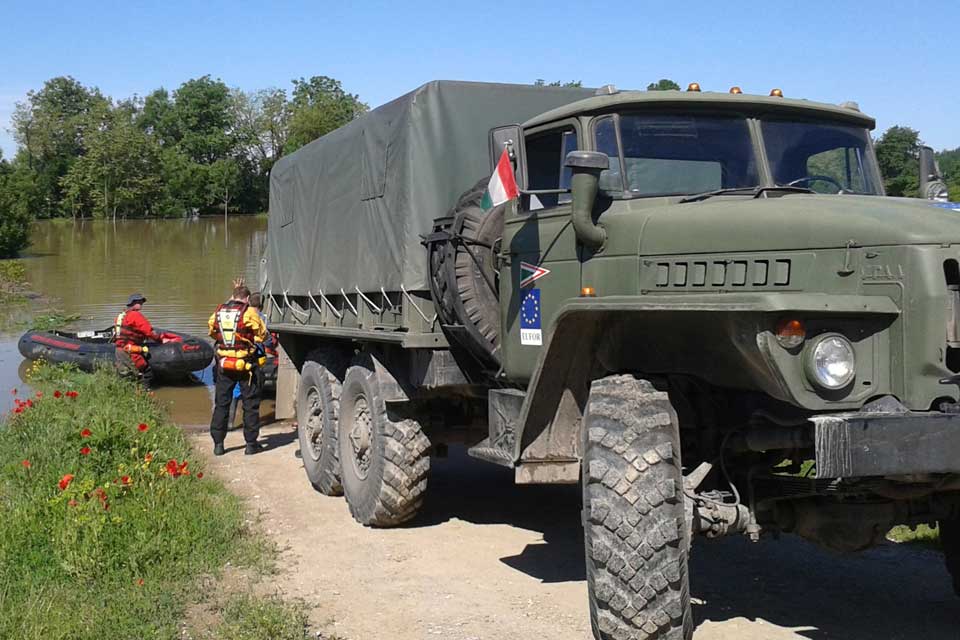 Basic Supplies are now the most essential
More than 200 flights have been performed by EUFOR helicopter teams, rescuing around 900 persons so far. The EUFOR disaster relief operation has continued with the transport of goods to affected areas all over Bosnia and Herzegovina. Food, water, pharmaceuticals, blankets and other supplies (in total around 15 tons) essential for people in need, have been transported by EUFOR air assets to the most affected municipalities in the north of the country - Orasje, Brcko, Doboj and Odzak. Where roads have been passable, trucks from the EUFOR Multinational Battalion have been used to transport a number of supplies including boats and engineering equipment.

Reinforcement of air assets
On 20th May, European Forces in Bosnia and Herzegovina also received support from the Swiss Air Force. The Swiss Armed Forces, which also have troops deployed to EUFOR Althea, transferred a Cougar helicopter from the KFOR mission to be involved in disaster relief in Bosnia and Herzegovina. The Swiss helicopter is being coordinated and tasked by the EUFOR Headquarters in Camp Butmir, Sarajevo. Yesterday 22 tons of sandbags were dropped to repair the river embankment in Vidovici near Orasje. The KFOR helicopter will be replaced tomorrow by a Cougar flying in from Switzerland which will be integrated into the EUFOR helicopter fleet until further notice.

To help where no one else can
To protect people and to provide relief is an important task for armed forces. This can be done in various ways. “What the Armed Forces of BiH currently do and what EUFOR does is a good example for the double use of forces. We use our soldiers, our knowledge and military equipment to relieve the people of this country now from the consequences of a natural disaster and so support our societies”, said Major General Dieter Heidecker, Commander of EUFOR. Armed Forces have the necessary manpower, off-road trucks and other equipment able to operate in difficult terrain and so be used in these kinds of situations. It is essential for them to be trained and maintain resources.

EUFOR and their soldiers from 22 nations will continue to assist BiH authorities to provide essential aid to the population severely affected by the floods.