Today, the United Kingdom marked the end of its 16 year contribution to EUFOR in Bosnia and Herzegovina with a flag lowering ceremony at Camp Butmir, Sarajevo, led by COM EUFOR, Major General Reinhard Trischak. 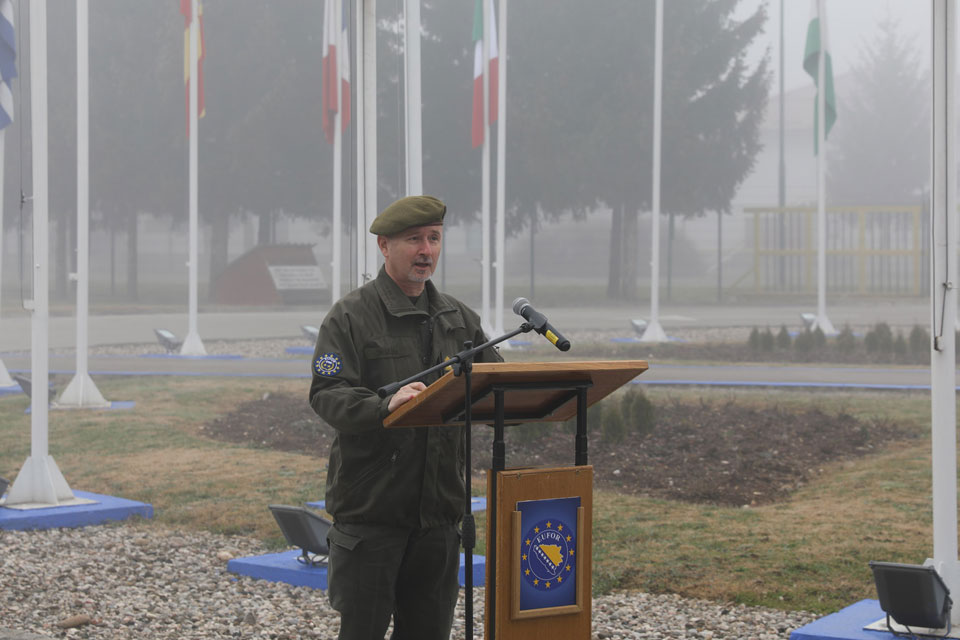 In his speech he praised the UKs unwavering and professional commitment to not only Operation Althea but also to the people of Bosnia and Herzegovina. A commitment, that began with UNPROFOR in 1992. COM EUFOR said

“The UK contribution to EUFOR has been outstanding in terms of commitment, performance and professionalism. It is, therefore, with sadness that we see the departure of UK’s personnel from EUFOR, which reduces the number of contributing nations from 20 to 19.

I would like to express my conviction that although now the UK flag is lowered in Camp Butmir, that the UK’s unwavering commitment to the Western Balkans, specifically to a stable and prosperous Bosnia and Herzegovina always remains high.”

Also present to witness the ceremony was the Ambassador of the United Kingdom to Bosnia and Herzegovina, Mr Matthew Field. In his speech he praised the close relationship between the UK Military and EUFOR. He said

“Thank you for acknowledging the UK’s commitment, not just in Bosnia and Herzegovina but also to all the other EU Military Missions around the world. It has been our privilege and our pleasure to serve with you and your staff.”

The UK Flag was then lowered by the remaining members of the UK Contingent to EUFOR and presented to the Senior National Representative, Wing Commander Vincent Jackson.