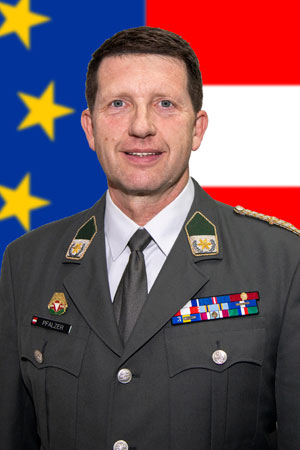 Date and Place of Birth 12 December 1965 in Vienna, Austria

Military Career
CSM Pfalzer joined the Austrian Armed Forces as a conscript in 1987. After the completion of an 8-month basic training, he continued with the NCO training and in 1990 he was promoted to Sergeant OR-5.

In 1992 CSM Pfalzer was posted to the Engineer Company of the 9th Support Battalion, where he served for 5 years and took part in numerous military trainings to become an engineer platoon leader in 1997.
In 1998 CSM Pfalzer was posted to the NCO Academy of the Austrian Armed Forces in Enns. His career at the Academy commenced with being an instructor at the Institute for NCO Training. Gradually he became a senior instructor in 2008.
In 2013 CSM Pfalzer was appointed as the Command Senior Enlisted Leader of the Austrian NCO Academy.

Deployments
CSM Pfalzer served in two missions (NATO and UN) in Syria 1991 and Kosovo 2004.
He also completed two tours in EUFOR Operation Althea as a LOT-NCO in Brcko District 2010 and Bratunac 2019. He was involved in several NATO DEEP activities in Bosnia & Herzegovina, Serbia and Hungary and as well, as host in Austria for delegations from Moldova and Serbia.