On 4 June 2014, the Swiss KFOR helicopter working in EUFOR returned to Kosovo.
The Swiss ‘Cougar’ helicopter, which is currently based at KFOR, has been in BiH since 20 May 2014, when it was sent there to help EUFOR with flood-related disaster relief work.
The crew of two pilots, three technicians and one additional officer will now return to their duties in Kosovo, to join the other two Swiss helicopters currently based there, as the requests for aid from the BiH authorities have now significantly reduced. 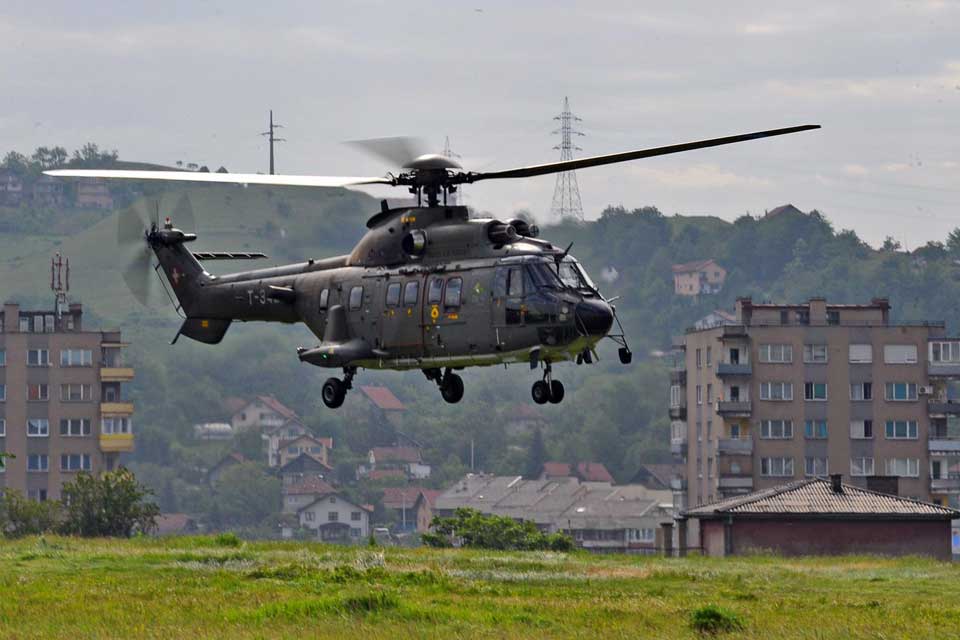 However, before they returned to Kosovo, Commander of EUFOR, Major General Dieter Heidecker, thanked the whole crew for all their hard work over the last few weeks. While serving in EUFOR the Swiss ‘Cougar’ team conducted over 90 evacuation flights, rescuing over 220 people, and airlifted over 100 tons of emergency supplies.
Commander EUFOR honoured the Swiss crew by presenting them with his ‘General’s Coin’. A General’s Coin is similar to a medal but is only given to individuals who merit the award by conducting outstanding work in the course of their duties.

General Heidecker said:
“You can all return to Kosovo with your heads held high for a job very well done. You are a credit to KFOR and to the Swiss military and EUFOR and BiH is indebted to you for all your hard work here over the last two weeks.”
EUFOR still has its own helicopter assets in BiH, which includes one Black Hawk and one Alouette 3, and in total EUFOR has so far conducted over 370 evacuation flights, rescuing over 1300 people, and airlifted over 140 tons of emergency supplies.